At Highcliffe, we endeavour to cultivate an environment where all students feel included, supported and valued. As part of our continuing work in this area, a new social group, the Highcliffe Inclusivity Association is being launched. This group is open to any student who identifies as part of the LGBTQ+ community, or as an ally of that community.

The group meets every Tuesday lunchtime in the library. It is led by students (with staff supervision), and is designed to provide an opportunity for students to get support and socialise; learn about LGBTQ+ topics and history; make positive change in the school. These issues matter to our students: the group is being launched in response to student requests and previous feedback from surveys where students have commented that “I believe not only Highcliffe, but all schools should teach about gender equality” and “Education about the range of gender identities and sexualities that exist and the types of prejudice people are still facing … [helps] students to be more accepting”.

Not only are schools required by the Equality Act 2010 to promote understanding about LGBTQ+ equality and challenge prejudice, and by Ofsted to promote the safety and wellbeing of the children and young people in our care, it is our moral obligation to ensure our school environment is a place where every child can realise their potential. In addition, a key aspect of fundamental British values as set out in the Department for Education's guidance is students’ understanding of the importance of identifying and combating discrimination. A recent report by the charity Just Like Us called ‘Growing Up LGBT+’ found that LGBTQ+ pupils feel far less safe at school, are twice as likely to have been bullied in the past year, are twice as likely as non-LGBTQ+ young people not to feel good about themselves on a daily basis and one in ten do not consider themselves to have any true friends at school.

Alongside our anti-bullying and safeguarding policies, the Highcliffe Inclusivity Association is an important way of actively supporting LGBTQ+ young people in our school, and of demonstrating our commitment to an inclusive school environment where every young person can be themselves and thrive. At Highcliffe we are one community. 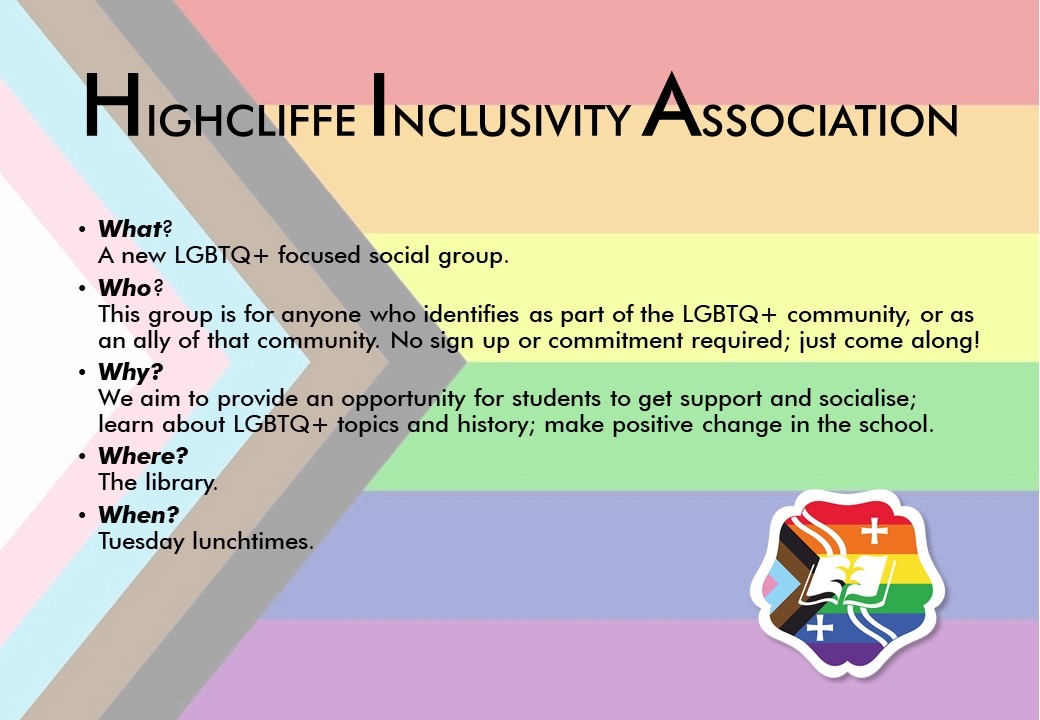